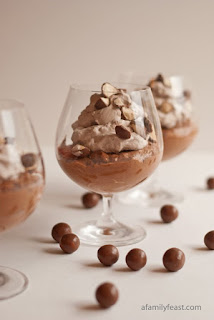 I love all things chocolate. Candy, cookies, ice cream, cake, men...chocolate, chocolate, chocolate. It's really obsessively ridiculous. One of my worst fears is that I will develop an allergy to it. My mother did in her late forties and I keep thinking, what if that happens to me? What would be the point of going on? LOL. Seriously, I don't mean that, but my goodness...no chocolate. What would I defer to?

I'm posting this yummy selection that I pulled from my Pinterest page (follow me) because it's one of my favorites. I admit for years I cheated. Dove Chocolate Discoveries (I used to sell for them) has an easy chocolate mousse item and it's delicious. So delicious that there's no reason to make it from scratch, but I have taken the time to make this one so I thought I'd share.

Chocolate Malted Mousse
Posted by rhonda mcknight at 7:00 AM No comments: 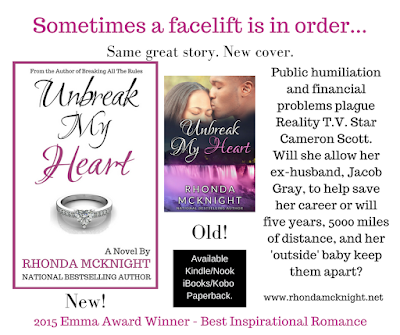 Read and excerpt at my website. Click here for the link!
Posted by rhonda mcknight at 3:56 PM 2 comments:

Makasha Dorsey of Woman in Progress Interviews Rhonda McKnight About Almost There... #FridayFinds 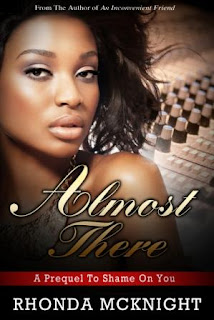 Three people at the brink of achieving all they’ve dreamed of since childhood…will the past get in their way?

Zannia Morrow is blazing a path to stardom as supermodel, Zane. Her million dollar face and body have landed her the most coveted modeling contract in the business, but Zannia has a problem. It’s one that money and success can’t fix.

Bonita Jones ran away from home at the age of 16. Now she’s Benxi, a hot new R&B singer with the right voice and look to take her right up the charts.  Her future is bright, but she’s done some things she’s not proud of. She’ll do anything to keep her secrets, even if includes sacrificing the success that’s right within her reach.

Mekhi Johnson has had success as a music producer. He’s got the talent, connections, and drive to take him all the way to the top.  He just needs the right artist to make it happen for his record label. Will he be able to sign Benxi, or will an old enemy stand between him and his next level?


Why is the theme of this project important?

Life if full of unpredictable events and sometimes bad things happen to good people. Stuff happens. I like to believe that my strength as a writer is in creating complex characters with deep wounds. The kind of hurts that only God can heal. Almost There is a story about the ugly stuff in life that happens to some people as children and young adults that impact their choices and often their options.

Almost There is a prequel to a novel I’ll be releasing in November. It’s the backstory for  Mekhi and Benxi, supporting characters that my readers have already become acquainted with in my Samaritan Woman series. Other titles are An Inconvenient Friend, What Kind of Fool, and Righteous Ways. I’ve also introduced a new character. Her name is Zane.

As for new readers, I think Almost There is the perfect place to begin with my books because it’s the story that happens before An Inconvenient Friend begins. In that respect, it stands completely alone as a title for the series.

What did you learn about yourself while writing this book?

That I have to stay true to the story, no matter what my brand is or what my readers expect of me.

Posted by rhonda mcknight at 7:00 AM No comments: