About the Book
Pamela "Pill" Jones has more than baggage; she has a whole storage unit. Partially raised by her older sister, she is accustomed to struggling to survive by any means necessary. Pill has vowed to always have the best. Priding herself on being a fashionista and living the life of a commercially successful hairstylist, Pill has just one problem: money runs through her hands like water through a sieve. When she taps out her bank account, Pill is forced to realize there are some things the makeup at the MAC counter can't cover, and some burdens her Dooney and Burke bag can't carry.


Living in the shadow of his cousin, Pill's husband of six months, Corey, is trying to forge his own identity with a spiritual foundation. After falling head over heels with the very sexy and self-confident Pill, Corey finds that his treasure of a wife comes with a promissory note. During the course of the Marriage Maintenance class at their church, Corey finds there is no end to their relationship issues. He hopes through prayer and devotion that they can find the source of their own individual pain, so they can heal together.

With Pill and Corey, keeping up with the Joneses means chasing after their own desires on the raw fuel of their convictions.


Book Review
Taylor-Made by Sherryle Kiser Jackson is an in depth look at how quickly marriages can fall apart when there is no communication, no trust and a failure to heal from past hurts. Ms Jackson did a wonderful job introducing her characters and allowing you to connect with them. Ms. Jackson has the ability to pull you into the story from the very beginning.


Corey and Pamela (Pill) Taylor are a newlywed couple of nearly six month and they are already having marital issues. They lack communication, they lack trust and they lack financial fidelity. He is a simple hard working man who is trying to make it on his own without the help of his family. Corey is tired of depending on and ridding on the coattails of his famous uncle and cousin. He has several unresolved issues related to his cousin that seeps its way into his relationship with his wife. Pamela works hard and she likes to look good even at the cost of the mounting bills that go unpaid.

Corey and Pamela participates in the Marriage maintenance classes at their church where the motto is We pray often, We pray together, We pray for each other, Before we let the Devil win, In our marriage, We go back and pray again, Divorce is not an option. Corey truly believes in the motto and wonders if Pamela feels the same. They go through many ups and down and ultimately come to a decision about what they want to do with their marriage.

I enjoyed reading Taylor-Made. I really pulled for Pamela and Corey. I would definitely recommend this book to others .

Taylor-Made is available wherever fine books are sold and at online retailers like Amazon.com
Readers may learn more about the author, Sherrlye K. Jackson at her website http://wwwsherrylejackson.com/
Posted by rhonda mcknight at 4:00 AM 3 comments:

About the Book
Shelia M. Goss brings readers a modern day retelling of David and Bathsheba.


Bathsheba Richards has just discovered that she has a half-sister who needs her help. Sheba's long lost sister isn't too happy about their reunion, though, since she has a lot of problems of her own. Sheba's dealing with her husband's boss, who wants her all to himself. After succumbing to his advances, Sheba gets pregnant, and there's no question about who the daddy is, since her husband has been overseas for the past three months.

David King is the CEO of one of the largest media conglomerates in the country. Few people know that David has a calling on his life, but he's been running from it. He thought having fame and fortune would fulfill the need. Only after Sheba gets pregnant does he realize the error of his ways. Praying for God's mercy, David tries to right a wrong. Whether he will succeed or fail remains to be seen.

With a long lost half-sister and a husband who will surely feel betrayed, Sheba's life is filled with turmoil. Will David be her knight in shining armor as he professes to be, or is her nightmare just beginning?


Book Review
Shelia M. Goss’ Ruthless is an interesting book that places a modern twist on the biblical story of David and Bathsheba.


David King is a wealthy man who literally has it all, money, power and any woman he wants but he only has eyes for Sheba. Although he knows it is wrong he can’t stop thinking about Sheba and how he can convince her to be with him. He eventually does some ruthless things to get what he wants, but can he pay the price for his actions?

Bathsheba Baker Richards is the happily married wife of Uriah Richards. She feels an instant attraction to David but has no intention to act on that attraction. Although she and Uriah have some financial issues they are still very much in love.

When David and Bathsheba meet you just know nothing good is going to come out of this relationship especially when God is nowhere in the midst. The author also gives us closure on her first Christian fiction book in the series Delilah. We finally find out what happens to Delilah and how she relates to the story of David and Bathsheba.

I enjoyed reading this book. It started out a little choppy but the storyline picked up and moved right along. It was a very quick read. I found myself rereading 2 Samuel 11-13:25, to reacquaint myself with the biblical story and I was pleasantly surprised that Ms. Goss followed the scripture. I anxiously await the next story of her notorious women of the bible.

Learn more about the author at http://www.sheliagoss.com/ or click Amazon.com to order the book.
Posted by rhonda mcknight at 4:00 AM 3 comments:

Take It From Him: For Men of Standard & The Women Who Love Them by Tremayne Moore 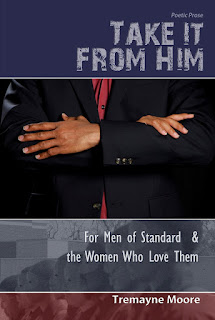 About the Book
In “Take it From” series, poet Tremayne Moore rips the masks off masculinity! This thought provoking look into the mind of manhood will have brothers rolling up their sleeves and sisters taking a deeper look at the men they know and love! Tremayne addresses the determined man, the tired man, the loving man, the real man, and more. Whether you're blue collar, white collar, clergy collar, or no collar at all, this Word is for you!


About the Author
Tremayne Moore, founder of Maynetre Manuscripts, LLC, is an accountant, a writer, a psalmist, a griot, and a spoken word motivational speaker.

Tremayne’s life can be summarized with a quote from the Apostle Paul from Philippians: “Christ shall be magnified in my body; whether by life or by death.”

Below is an interview with the author:


You may learn more about Tremayne at his website at http://www.maynetre.com/

Click here for the link to Amazon for all his books.
Posted by rhonda mcknight at 10:00 AM No comments: