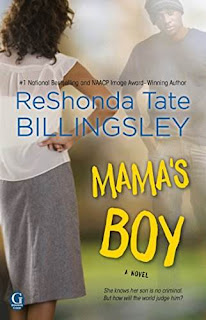 When her son is in trouble, a heartbroken mother finds the courage and faith to save him, in ReShonda Tate Billingsley’s powerful family drama—a novel as timely as today’s headlines.
The breaking TV news rocks Jasper, Texas, to the core: a white police officer is fatally shot in a scuffle with three black youths—and a cellphone video captures Jamal Jones, the sixteen-year-old son of esteemed Reverend Elton Jones, escalating the tragic encounter. Now, as the national spotlight shines on a town already rife with racial tension, Jamal is a murder suspect on the run. And all of Jasper—even the Reverend’s congregation—rushes to judge the boy they thought they knew.
But Gloria Jones knows her son best, and she races to find Jamal before the law does—to the outrage of her workaholic husband. Once she finds him, she has to decide whether to turn him in or help him run. With ruthless prosecutor and Houston mayoral candidate Kay Christensen hungering to put another young thug behind bars, Gloria will face her biggest battle yet. And when long-hidden secrets and shocking lies come to light, throwing Jamal’s case and his destiny into a tailspin, all Gloria can do is pray that the truth—and a mother’s unconditional love—will be enough to redeem the mistakes of the past and ultimately, save her son.

What it meant to have the Grim Reaper sneak up on you, wrap his claws around your heart, and squeeze. That’s what Gloria Jones felt right now. Her heart tightened, her breath slowed, and Gloria wondered how it was that she hadn’t passed out. All because of the story that she’d just seen on the news. “Again, we want to warn you that this video is disturbing,” the red-haired female anchor from Channel 12 News said. “Police have released this footage in hopes that someone can identify the suspect or the other two boys in the video.” The video that had initially stopped Gloria in her tracks during the news introduction began playing again. “Put the phone down!” a police officer in the video yelled. “I have a right to film,” the young boy replied as he turned the camera on himself. It was dark and the picture was grainy, but he was clearly recognizable. And even if he wasn’t, the tiny cross tattoo on his neck was a dead giveaway. “You see how they treat us?” he continued. “If you’re young and black in America, you’re guilty until proven innocent!”
Purchase Links
Amazon   and Barnes and Noble
Pop over to Michelle's blog to read an interview with Reshonda.
Michelle's Book Stop: Hot New Release!! Mama's Boy by ReShonda Tate Bill...: I'm so blessed to be able to feature this dynamic writer, ReShonda Tate Billingsley. She is a gifted woman of faith. ReShonda is ...
Posted by rhonda mcknight at 10:15 PM No comments: 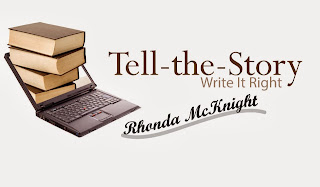 Overview
Write It Right is an intensive workshop for fiction writers designed around the essential building blocks of fiction: plot, character development, description, dialogue, story structure and self-editing.  Other elements of fiction writing will be introduced.
Schedule
Week 1 - Getting Started and Plot
Week 2 - Character Development and Description
Week 3 – Dialogue and Story Structure
Week 4 - Self-Editing and Tips for Polishing Prose.

What You’ll Learn
·        The principles of creative writing and getting started
·        Draft Writing Techniques
·        Plotting – Who, Why and Why Not
·        Character development and characterization techniques
·        How to enhance your writing through description and sensory details
·        How to write attention grabbing openings, stake-raising middles, and resounding ends
·        Rewriting
·        Self-editing
·        Techniques to improve your dialogue-writing skills and the mechanics of structure and punctuation in dialogue
·        Specific strategies for polishing your work

Due to limited class size and first come/first serve nature of the class space, payments are non-refundable.

Payment invoice will be emailed.
Contact Rhonda McKnight  at rhondamcknight@gmail.com with all questions. Please include “Writing Workshop” in the subject of the email to ensure you receive a prompt response.
Posted by rhonda mcknight at 12:38 AM No comments: