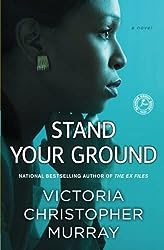 From the #1 Essence bestselling and award-winning author Victoria Christopher Murray comes Stand Your Ground, a new novel about two women who are faced with the same tragedy.

A black teenage boy is dead. A white man shot him. Was he standing his ground or was it murder?

Janice Johnson is living every black mother’s nightmare. Her seventeen-year-old son was murdered and the shooter has not been arrested. Can the D.A. and the police be trusted to investigate and do the right thing? Should Janice take advantage of the public outcry and join her husband alongside the angry protestors who are out for revenge?

Meredith Spencer is married to the man accused of the killing and she sees her husband and the situation with far more clarity than anyone realizes. What she knows could blow the case wide open, but what will that mean for her life and that of her son? Will she have the courage to come forward in time so that justice can be done?

In the first few pages of Victoria Christopher Murray’s new novel, Stand Your Ground, I was thinking, “This is it -- one of those rare novels that will change me forever.” I was right.

A black teenage boy is dead. A white man shot him.

From there, the story is set in motion and two women…the mother of the dead boy and the wife of the shooter take center stage. One searching for truth and the other being certain of it, their lives and hopes intersect through public shame and private pain. There are two sides to every story and Victoria Christopher Murray challenges the reader to see both. The recurring theme of standing your ground, taking a position, making a decision based on what you believe was not just the title, but persistent and thought-provoking words that echoed throughout the book.

The plot twist caused my heart to constrict. But while, I as the reader (a mother of two black sons) was only gripped with fear, Janice Johnson was living the nightmare. During this story I felt so many emotions: anger, sadness, helplessness and at times, empathy and relief. In the end I was forced to ask myself:  What is right and what is wrong? What do I really believe? In the same way a character was forced to with these words:

I didn’t care if the attorneys knew or if the judge knew—they could have thrown me into jail for contempt or for perjury; it didn’t matter. When I told that lie, I didn’t even care that God knew—I would pray for forgiveness later.

Who said that? You’ll have to read it to find out. As always with Victoria Christopher Murray, there are layers and there are secrets and there is… the past. Detailed characterization is this writer’s gift. Memories shown through flashbacks added to the intensity as I turned page after page after page into the wee hours of the morning.

This was a brilliantly written book that I would recommend to all readers. I also hope to see it take its place alongside other great critical works of Toni Morrison, Maya Angelou, Zora Neele Hurston and the like who have written stories that climbed into our hearts, made inroads through our souls and changed our consciousness.

Stand Your Ground will be available where ever books are sold on June 30, 2015 and in e-Book format. Pre-order your copy today by clicking on Amazon or BarnesandNobles today!

A galley of this book was provided by the author for a review.
Posted by rhonda mcknight at 7:00 AM No comments: